Pangborn Europe is always committed to development and growth. In these days, a project for the improvement of capabilities of our production system is currently underway. Once this project is complete, Pangborn Europe will be one of the most productive sites within Pangborn Group, offering top-level engineering and production capabilities.

As a proof of this continuous effort to excellence, on February 14th, Pangborn Europe received a visit from a top-level delegation of FAW foundry, a Chinese group which is one of the most important foundry group in the world.

After a general presentation of the company, the delegation spent an entire morning in the production facilities, being impressed by the machines and the technology they could appreciate. 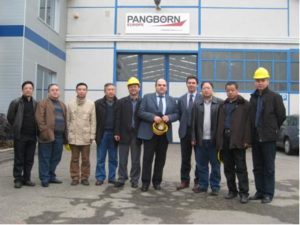 The tour ended in the internal foundry, recently developed and revamped with new plants and technology. The only one in the market with its own foundry, Pangborn Europe is always proud to demonstrate to its clients the possibilities of customized castings for special machines and quick reaction for spare parts and assistance. The meeting proceeded with a technical discussion on the project at which FAW and Pangborn are cooperating.

FAW and Pangborn delegations, both satisfied of the very useful meeting, went together out for dinner. The friendly and relaxed conversations that took place were the due conclusion of the day.

Before leaving, the Chinese delegation thanked Pangborn Europe General Manager Mr. Renzo Boarino for the hospitality and for the technical support the company is giving to the development of a foundry plant. We are sure that the visit and the interest of the international players will grow more and more.

What is Shot Blasting? Infographic

Pangborn: Making an Impact
A Leader in the Shot Blasting Solutions


Pangborn and Genesis are registered trademarks of Pangborn.